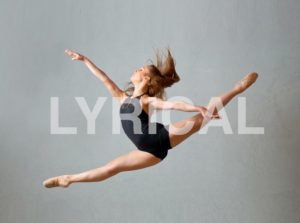 Lyrical dance is a fusion of ballet and jazz dance techniques.

Lyrical dance challenges choreographers and dancers to use motion to interpret music and express emotion. A lyrical dancer’s movements attempt to show the meaning of the music. Lyrical jazz is a very passionate and emotional dance style. It portrays certain emotions such as love, and tells a story through every movement made.

Lyrical dance has a relatively recent history and a genesis based on the coming together of ballet with rock/folk/pop/alternative music and a variety of jazz dance styles and modern dance. (To a much lesser degree, punk and swing styles have also been a minor influence.) It is mainly performed to music with lyrics, and the song’s lyrics are a driving force and key inspiration for the movement. Choreography is often emotional, gripping, and exquisitely delicate, all at the same time.

Lyrical dance gained its name not because the lyrics of a song are indeed sometimes highlighted over the rhythm, but because of the meaning of the word lyrical: having a poetic, expressive quality; musical; characterized by or expressing spontaneous, direct feeling; expressing deep personal emotions or observation; highly rhapsodic or enthusiastic. Lyrical dance is expressive, subtle and dynamic, expressing emotions through movement. It is a combination of intricate, highly technical, and pedestrian/naturalistic moves. Lyrical dance is often choreographed to a song about freedom, of releasing a sad emotion, or of overcoming obstacles, but can be choreographed to any human emotion-related song. Depending on the given song and choreography, a lyrical piece may or may not be graceful, but will always be expressive and unpredictable, particularly in comparison to ballet and other jazz pieces which may have a more presentational quality.
A solid, ballet-based technique is an essential component of this advanced style of dance, as is a facility with various other forms of jazz, some contemporary/modern dance, and proper placement and bodily alignment. Lyrical choreography is often peppered with intentionally pedestrian moves, amid the more challenging movements, to create a simultaneously organic and dramatic feel. Lyrical is based around choreography and the interpretation of the music. Routines are based around feeling and emotion and, though technique is crucial, spirit generally tells where the dance will go.

Although lyrical is stereotypically choreographed to music that is slow or downbeat, melodic and sweet-sounding, it is a very broad form of dance including many dynamic, fast-paced and sometimes thrashy pieces. Upbeat, aggressive styles of music are used frequently. Music can be of any genre; pop, rock, and even hip hop/R&B styles, are popular for choreographing. Pop selections, including soulful, powerful songs by emerging artists, are often used in lyrical dance.